It’s hard to keep up with all the activity with FOLDEX and this exciting project with Pressline and the Columbus Dispatch. Let’s start over in Switzerland where the mechanical trials for the first two machines are now complete. Each machine is lifted on to a dedicated test stand and run in stages up to 110% of rated operating speed. Pictured, you see the first ‘flying’ folder being handled by crane while moved to the test stand just two weeks ago.

Each of the folders was set up to operate in both the straight and collect modes in testing. Bearing Temperatures, noise levels and vibration were sampled. “This folder is very quiet for a machine of this time”, noted Hugo Britschgi, Managing Director for MPEL the manufacturing partner for FOLDEX in Switzerland.

Two more machines are assembled and ready for testing before they are shipped to the US. Meanwhile in the US, the first of the folders has arrived in Columbus. The folder was mounted in a special meta; skid designed to meet air freight loading and trucked to Paris where it was loaded aboard and Air France Freighter and flown to Chicago. The machine has come through in great condition and Presslin Crews have already offloaded it from the truck and moved it into the Columbus Dispatch Facility.

It’s a great start to an installation and commissioning schedule that will continue for 6-8 weeks as the four machines are in turn received installed and brought up to running condition. Stay tuned for further updates! 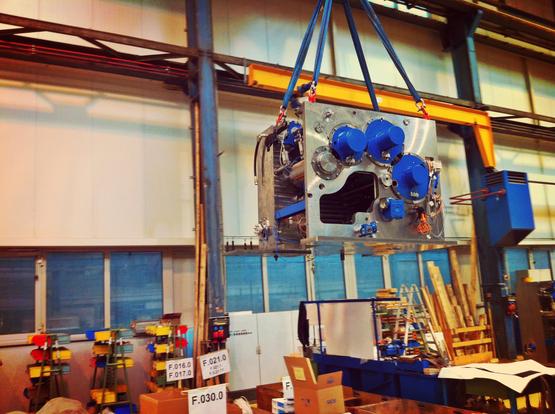